Nod to Booyakasha at Lone Star Ball for this awesome gif: 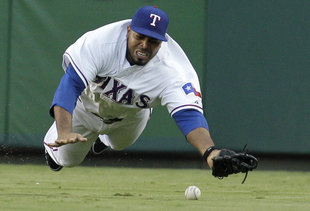 Last night was awesome.  Then suck.  Then awesome.  And finally: SUCK.

The Good
Through 6 innings, I was in Ranger-nerd Nirvana, basking in the awesomeness of Cliff Lee, and what looked to be a Grade A a$s-whoopin of the Bronx Bombers.  A “statement” was being made until…

The Bad
I don’t even remember the details, other than a Jeetah lead-off triple in the 7th, a wild-pitch…or was it a passed ball?  Dunno, but suddenly it was 6-4.  Then we go to the eighth, and Frank “let’s make it interesting” Francisco gives up a moon-shot to Marcus Thames, and we’re suddenly at 6-5.  Frankie lucks out, getting Austin Kearns to ground into a double play to end the inning.

The FUgly
After pitching two innings the previous night, Neftali Feliz was out-o-gas.  In the blink of an eye, we were tied, then the Yanks were up 7-6.

Bottom 9, a glimmer of hope.  Elvis leads off with a triple against Mo Rivera…was a repeat of the previous night’s theatrics on tap?  SURELY it was, with Elvis on 3rd with NO OUTS and Michael Young, Josh Hamilton, and Vladdy on deck and being pumped up by the Mighty Mouse theme song echoing throughout the halls.

Well, no.  Three weak-a$s outs later, yours truly was skulking out to the parking lot, listening to obnoxious Yankee fans tell us all how many rings they have.

Here’s what my favorite Rangers Blog, Baseball Time in Arlington had to say about the whole mess.

…and here’s a link to other links from my other favorite Rangers site, Lone Star Ball.

UNI Watch
* Yet another reason I love The Cliff…he once again selected the BAPL Uni of Choice – The Home Whites.
* Phil Rizzuto jersey siting – While I certainly have competitive fan disdain for the Bombers, I do respect their success and tradition.  At the concession stand, an older fella was sporting a Phil Rizzuto jersey…I complimented said jersey much to the fella’s delight. 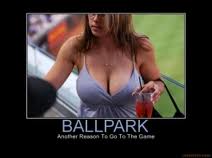 FILF Watch
Welcome to the first sentence you’ve probably read in this post.  Nice to see you again.

* Aside from the cutettite little freckled brunette in the sun dress about three rows down, the FILFage in and around the BAPL VIP Seats was lacking to say the least.  Mostly because this intrepid reporter was surrounded by Yankee fans of the obnoxious male persuasion.  A disappointing night on all fronts, dear readers, my apologies.
(Yes, I just made up the word “cutettite”)

The Bostons are in town this weekend, hopefully the results and FILF matter will be of much better quality and abundance.

Nellie photo from the Fort Worth Star-Telegram.